Skip to content
From the Archive: Reflections at the end of COP21 for Bristol 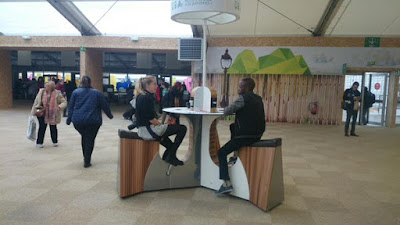 As you might imagine, especially given the focus on cities, it was an exciting two weeks for Bristol.  The City was everywhere.  In Paris with Anne Hidalgo; with its resilient partners in the Rockefeller 100 Resilient Cites group; representing smart city investment on behalf of Eurocities; hosting a Bristol Green Capital display in the Green Zone; and also sponsoring the linked Cities and Regions Pavilion nearby. Our city is going global in reputation, stature and visibility . This is a great achievement for our city and a great opportunity.  We are viewed as ambitious, eager to embrace the new economy, and supportive of technology and creativity.  We also had hundreds of people come to our stand and ask about moving to Bristol – the best and the brightest of the next generation also see Bristol as a place to bring their talents.

We cannot be complacent, however.  A corollary to the message of ambition was that a new race to lead in the global energy transformation has already begun; the cities, regions and nations that drive the agenda will prosper and those that do not will be left behind.  Those that move slowly will eventually benefit from new innovations, but the skills, businesses and IP will have moved elsewhere. Bristol is one of the leaders but it will have to fight to remain so.

In this sense, it is exciting to see the European Green Capital year ending with some exciting consolidation around major themes. Among these are partnership, resilience and health and well-being.  Here, however, I want to focus on three others; two where our efforts are consolidating into deeply impressive and globally distinctive initiatives and a third where we need to do better.

One of the major themes of this year has been energy use, and Bristol’s Transformative Action Plan, The Bristol Billion, will dramatically accelerate residential energy efficiency. This TAP, by virtue of its concrete targets, themselves underpinned by the University of Bristol Mini-Stern Study and the STEEP Project, was a foundation to the ICLEI and Mayors’ argument that cities do have the appropriate ambition.  The Bristol Billion will work in tandem with the new City Council-owned Energy Company, launched on 1 November 2015. The company will initially focus on using its profits to improve energy efficiency and tackling fuel poverty, and it will eventually offer a renewable tariff. Crucially, the Company intends to complement rather than compete with existing and emerging community energy initiatives, such as that explored on 14 December 2015: Towards a Smart Energy City: mapping a path for Bristol.

(NOTE: While many of these initiatives have stalled or their aspirations curtailed due to austerity and changes in governance, it can be argued that the ideas still thrive in other forms.  In particular, the launch of the City Leap initiative could procure the financing necessary for real transformation to low carbon transport and energy infrastructure.)

Another emerging theme is the role of the Smart City, whether it be Bristol is Open or the Bristol Brain (Bristol’s other Transformative Action Plan). I have written about these extensively and won’t repeat that here!  Ultimately, however, I do not think these will be about techy solutions to our cities’ problems – although that will certainly be part of the smart, future city.  I think and I hope that smart city technology will yield ‘smarter’ citizens and ‘smarter’ leaders allowing us to make much harder – and smarter – decisions. What I mean by that is that smart technology can empower people to make their own observations, to be directly involved in the exploration and learning journey of their home and city.  We will be able to monitor electricity usage and heat loss in our own homes; urban planners will be able experiment in a virtual world to fully explore the implications of their decisions.  Ultimately, this technology could provide a place where many people can come together and discuss their future city. This is Colin Taylor’s vision for the UKCRIC-funded Collaboratory.

There are many opportunities that will come from addressing climate change; but the full road to decarbonisation will be challenging, requiring hard choices and compromises.  In Bristol, home improvements will create jobs, fight fuel poverty, save money, improve health and reduce emissions – a win win win win win proposition! A Bristol transportation system that produces no carbon dioxide will be much harder to achieve.

To me, finding the pathway to that political consensus – and the inclusion that demands – is probably the third major theme of 2015.  And not because we did it terribly well.  Some successes include the fantastic new Sustainable Education Programme.  And I think we did okay in the Cabot Institute by putting on many events and getting out into the city to educate or inform, often with artists or other groups. Local initiatives have also raised awareness.

But we have not truly entrained new and diverse groups in a new dialogue; instead it feels as if the old dialogue has just had the volume turned up.  That’s fine but we can do more. This issue was the focus of the meeting I alluded to in the first blog and the subject of Helly’s blog on behalf of Ujima Radio.  Convened by Policy Bristol, the Green Capital Partnership, Ujima and ourselves, the meeting explored some of the challenges we face.  I’ll revisit this in the New Year, but I’d like to share a few initial thoughts.

We listen to each other but often do we understand. That is perhaps inevitable as we come from different backgrounds; nonetheless, we have to invest the time to really understand the wants, needs and (most of all!) capabilities of the many groups in Bristol.

Minority groups are invited to events but rarely given the opportunity to set the agenda. This must change.

Different groups have their own suggestions and ideas, often arising from our diverse cultures.  We need to pivot from preaching about solutions to sharing ideas.

Building mutual trust in one another – trust in our fellow citizens and our leaders – must be a focus of 2016 as we build on our Green Capital legacy and look to the future.  I do not have an easy answer to that; no one does.  But perhaps some small, positive steps together can help to build that trust.