I wrote the following as an introduction to the Bristol Green Capital Arts Programme in 2015.  I still agree with every word – the power of art to create a space for contemplation and collaboration, thereby allowing new ideas to prosper and grow.  If I were writing it now, however, I would stress the need to ensure that art is commissioned equitably and shared inclusively.  I would stress that even when art is accessible to all, its reach is not always universal, its audience not biased.  And so I would not only celebrate the power of artistic collaboration but the obligation to engage marginalised communities (recognising the structural barriers that hinder that) and ensure that their artists are funded and their voices heard. 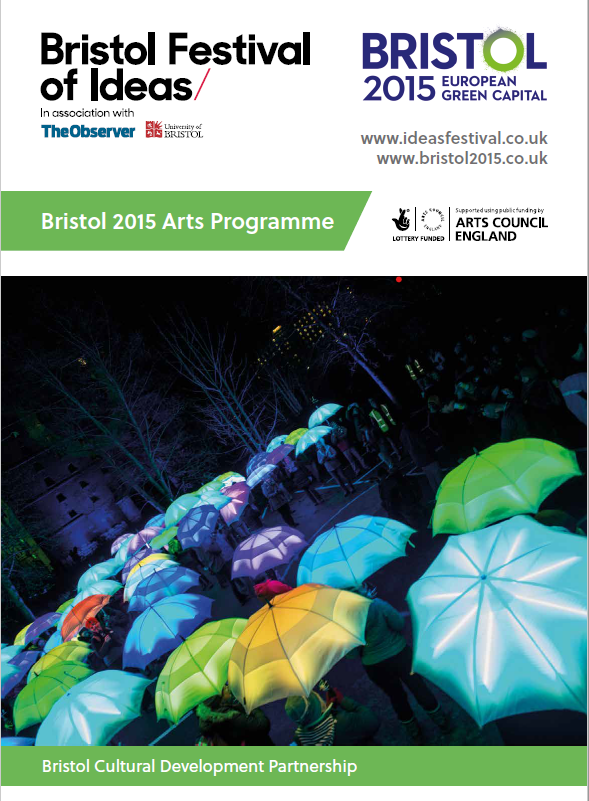 During the Green Capital year, the Cabot Institute is excited to work with a fantastic variety of artists, including many from our culturally vibrant city.   Many of these pieces, from the exotic beauty of Fujiko Nakaya’s Fog Bridge to the playfulness of Alex Lucas street art to the haunted mystery of Luke Jerram’s Withdrawn, cause us to reconsider our lifestyles, our city and immediate surroundings, our national beauty and the wider world.  Others, like the Coleridge Lectures, serve as a platform for debating diverse contentious issues, from environmental ethics to animal rights, in new contexts.

The Cabot Institute has worked with many artists and we do so because of their ability to transcend exhausted narratives and stimulate new dialogue. The discussion over how we Bridge the Gap to a sustainable and low carbon future is too often mired in a debate between academics or environmentalists against ‘pragmatic’ economic considerations.  That is a false dichotomy that must be shattered, but it will not be shattered by the current participants.  It requires the intervention of new voices and new perspectives, a role that is particularly well suited for artists.

One of the most powerful ways that artists change the conversation is by causing us to slow down, to consider, to stop debating and to start contemplating.  With a few notable examples, art is not direct in its message, which can be elusive or enigmatic.  In our world of fifteen minutes of fame and 140 character conversations, I think there is great power in an intellectual stimulus that eludes simple definition.  It was fascinating watching people stop at the foot of Pero’s Bridge, stare at the billowing clouds of fog and ponder what it meant.  Sustainably living on our planet requires lateral thinking and vibrant discussion but also contemplation.

Via these more sustained and elusive interactions, art makes us examine ourselves and our surroundings differently, and in doing so causes us to reach unexpected conclusions; these can lead to the new ideas needed to live in an increasingly uncertain world.  During my conversations with the In Between Time organisers and participants at the launch of the Fog Bridge, we were continually drawn to its peaceful character and its invitation to collaborate with weather – it was not exactly a metaphor for the catastrophic and dangerous types of extreme weather that climate change is likely to cause.  I firmly agree with the scientific and political consensus that the best and most fair policies, for our planet and our society, are those that avoid rapid and extreme climate change.  But if we do fall short, the Fog Bridge reminds that there are more nuanced solutions than simply fighting the changing climate by building higher flood defenses.

Of course, if the Bristol 2015 Arts Programme is to achieve this potential, then it must be inclusive and enduring.  Can we create art that will linger for years – either physically or in the imagination?  Can we ensure that the art is not only internationally respected but that it resonates and connects with the citizens of Bristol? And most importantly, can we ensure that it brings beauty and value to the entirety of our city, thereby serving as a gateway for inclusion and empowerment?  That is what makes the diverse and city-scale projects described here so exciting.  They are quirky, thoughtful, stimulating, and most importantly, embedded via the Neighbourhood Arts Project in every part of the city.