Cabot Institute Director Professor Rich Pancost will be attending COP21 in Paris as part of the Bristol city-wide team, including the Mayor of Bristol, representatives from Bristol City Council and the Bristol Green Capital Partnership. He will be writing blogs during COP21, reflecting on what is happening in Paris, especially in the Paris and Bristol co-hosted Cities and Regions Pavilion, and also on the conclusion to Bristol’s year as the European Green Capital.  Follow #UoBGreen and #COP21 for live updates from the University of Bristol. Part 2

On Monday, the Bristol Team arrived in Paris for the 2015 UN Climate Change Conference (COP21).  The Bristol cohort includes not just the Mayor and Bristol City Council, but also representatives from the Green Capital Partnership and an independent group from Love the Future (15 stalwarts who cycled from Bristol to Paris through typically British November weather). I’ll be joining them on Sunday… but some of the most exciting activity will happen today.

Bristol’s primary engagement with COP21 will be via the Cities and Regions Pavilion, hosted by Paris and Bristol and facilitated by ICLEI – Local Governments for Sustainability, with support from over 40 partners.  It is testimony to the stature of Bristol as 2015 Green Capital that it is able to share this venue with Paris. Moreover, the Pavilion is a fantastic opportunity for Bristol to share, connect with and learn from hundreds of cities from across the globe.

Bristol is one of 88 cities and regions in 42 countries to present innovative projects aimed at placing local and regional governments at the heart of positive and long-term climate action.  These Transformative Action Plans (TAPs) represent a 10-year initiative that aims to transform the lives of their citizens.  They arise from ICLEI’s recognition that local entities must take the lead in delivering but also extending the commitments emerging from the national-scale negotiations.  Bristol is pitching two projects, one on energy efficiency and one on smarter future planning of cities. The University of Bristol, including its Cabot Institute, has been closely involved with the development of both and former Bristol Professor Andy Gouldson will be sharing the stage with Mayor George Ferguson today.

“Bristol’s innovative plans, boosted by our year as European Green Capital, have been rated amongst the very best across cities and regions around the world thanks to their potential to transform the lives of our citizens. We’re proud to be among the world’s pioneering sustainable thinkers at COP21 and we look forward to bridging the gap ahead of the expected 2020 agreement with immediate actions that help reduce emissions, tackle poverty, improve lives and create new jobs through investment in low carbon projects.”The first proposal, entitled ‘Energy efficiency for everyone’ (or Bristol Billion), is for a $1B (or £700m) investment to make Bristol’s buildings more energy efficient, thereby achieving significant carbon, energy, economic and even health savings. It will involve refurbishing 56,000 homes in Bristol – 30% of the city – and crucially it will not only make our city more sustainable but it will lift these homes out of fuel poverty and reduce health costs.  This proposal is based in part on a Cabot Institute-commissioned report that has also been released to the public today: The Economics of Low Carbon Cities: A mini-Stern Review for Bristol. This research shows that Bristol can achieve marked reductions in its emissions while saving money; in fact, the whole project could pay for itself in under a decade.  However, such a bold endeavour requires bold financing and hence the Bristol Billion proposition. 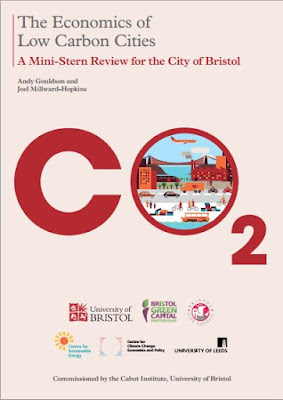 The Bristol Brain could facilitate city-scale planning decisions ranging from emergency services, road maintenance, and new public works. It could allow the social and economic impacts of major investments to be assessed and justified. Most importantly, it is a tool for testing and thereby empowering the radical reimagining of Bristol. It is the type of tool that citizens can use to justify maintenance of the M32… or its conversion into a bus-exclusive route… or even closing it and turning it into a city-scale garden.The Bristol Billion should achieve the energy efficiency gains necessary for the city to meet its 2015 to 2025 emissions reductions targets, but Bristol must also establish a foundation for the more challenging emission reductions to occur beyond 2025 and especially 2030.  Whether it be transforming the South West energy supply chain via the Bristol Energy Companyor transforming its transport system, these changes will be more challenging and controversial. And that is the basis for the second project, the ‘Bristol Brain’, which seeks to reimagine how citizens and planners can work together to shape a sustainable future for the city. The Bristol Brain is ‘a physical and digital city model, on top of which, real-time data and sophisticated analytics can be projected and visualised, creating environments that can be explored through virtual and augmented reality. This will allow different scenarios for future developments to be explored as if they are real, and for the impact on energy, transport, air quality and other factors, to be fully understood.’

This type of creative imagining is vital. Professor Colin Taylor, the head of the Cabot Institute’s Future Cities research theme, has argued that robust future city planning requires a city emulator so that we can truly explore the potential costs and benefits of truly transformative change. Crucially, the Bristol Brain would also support the more real-time interactive experiments that will be enabled by Bristol is Open and ensure that Bristol remains at the cutting edge of creative technology.

There remain challenges.  According to Bristol City Council, ‘The critical next step is to ensure these projects receive adequate financial resources to address urgent and evolving local needs to create a sustainable future.’

Another challenge is ensuring that such projects, especially the Bristol Brain, create an open and inclusive conversation about Bristol’s future. The University is committed to supporting these efforts.  If the Bristol Brain were to be made available to the public, perhaps via an allotment of the University’s High Performance Computing facility, then it becomes not just a resource for planning and consultation but for citizen-led propositions and inclusive innovation.

The COP21 ambition, expressed by national governments via their Intended Nationally Determined Contributions(INDCs), is very likely to fall short of the global target of 2 degrees C warming. As such, it is crucial that other actors, including cities, take the lead in driving a more ambitious emissions reduction agenda. Moreover, they must work with universities, industry and civil society to stimulate, incubate and test new innovations.

Bristol recognises that it can do more than follow an emissions path set by others. It can be a Laboratory for Change.
—————————————–
Note: This blog is based partly on and includes text from a Bristol City Council press release.