In 1970, some of the world’s leading research held the first Organic Geochemistry GRC.  It was not the first organic geochemistry conference, and our field traces its origins to some 20 years earlier – when Alfred Treibs showed the structural link between biologically produced chlorophylls and hemes and their diagenetic products in rocks and oils.  In doing so, he showed that organic matter in the sedimentary record was nearly entirely of original biological origin – albeit significantly altered by diagenetic and catagenetic processes.  This then was the platform for a diverse discipline that explored topics ranging from the exploration of life on the moon and other planets, the fingerprinting and discovery of fossil fuel deposits (as well as the fingerprinting of fossil fuel contamination), the probing of critical Earth system processes, and the reconstruction of the past – in historical and archaeological contexts to recent climates to deep time and even the early history of life.

I was fortunate to be chosen by my colleagues to chair the 2020 Organic Geochemistry GRC which would have marked its 50th Anniversary.  We had a fantastic lineup of speakers – from diverse backgrounds, international, and with interests ranging from the origins of biosynthesis to the fate of organic matter in polar regions to the structure of membranes (many of the best biomarker tracers for past climates are membrane lipids). Unfortunately, that was cancelled due to Covid.

Instead we marked it virtually, sharing photos and memories.  This fantastic figure by Keith Kvenvolden captures the origins of the GRC, its attendees and themes.  It has changed in many ways but the seeds of everything we do now – the discovery of new biological and geological materials, the centrality of analytical innovation, the ambition to look at *anything* – were already present. 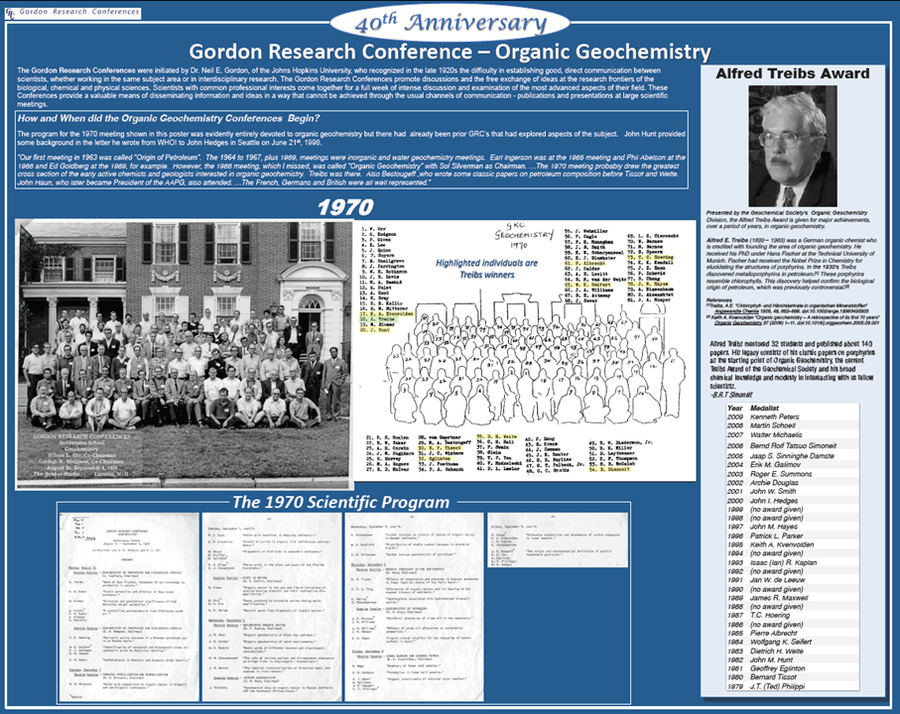 For the past 20 years or so, the Organic Geochemistry GRC has been hosted at Holderness School in New Hampshire.  We miss you.  But Roger Summons was passing through and took some photos…. we are there in spirit. 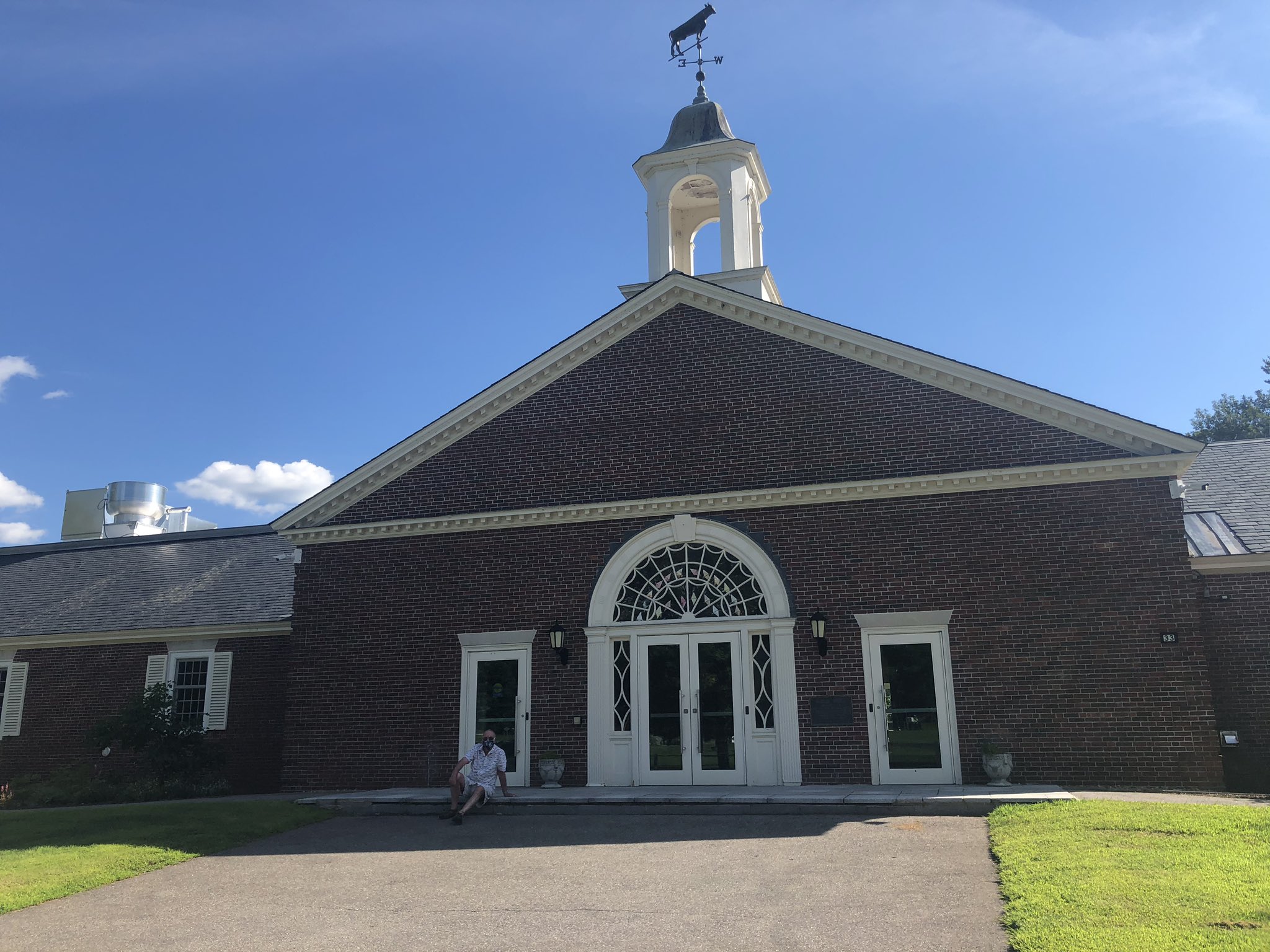 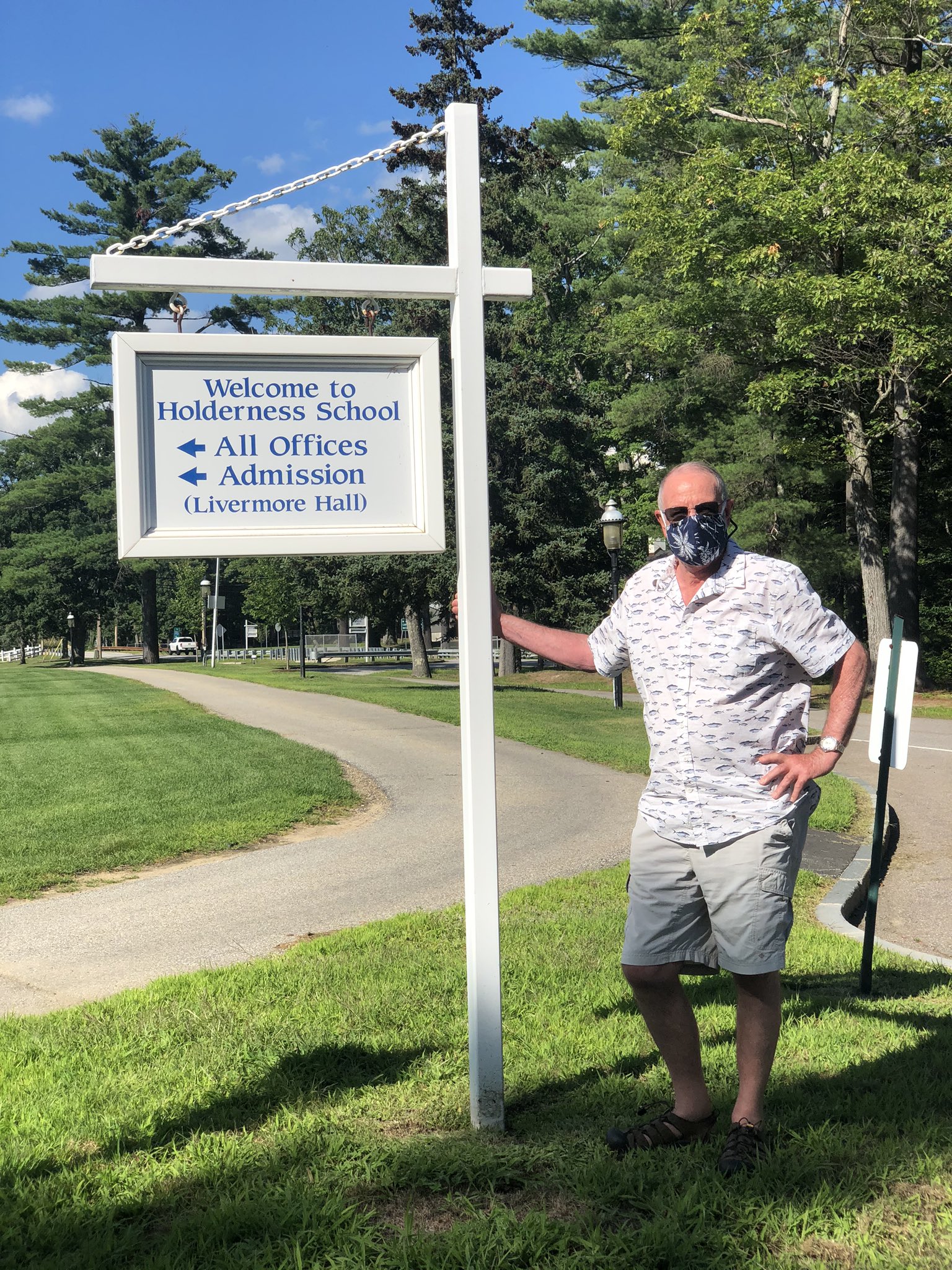 And some pictures from the past.  They would not be complete without table football! Who are these fierce competitors.  And where are their shoes? 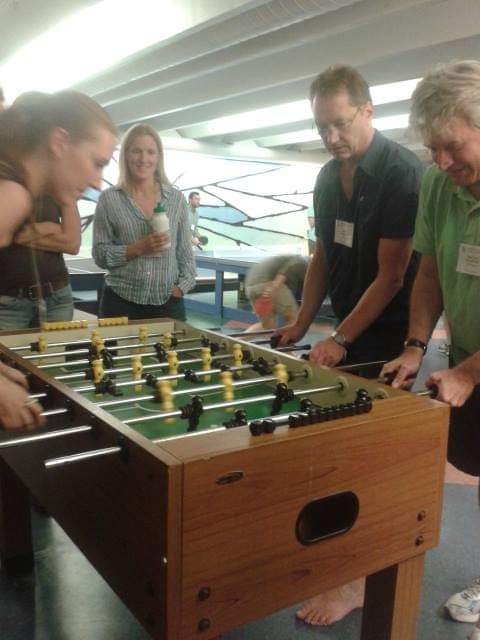 And some photos courtesy of Roger! 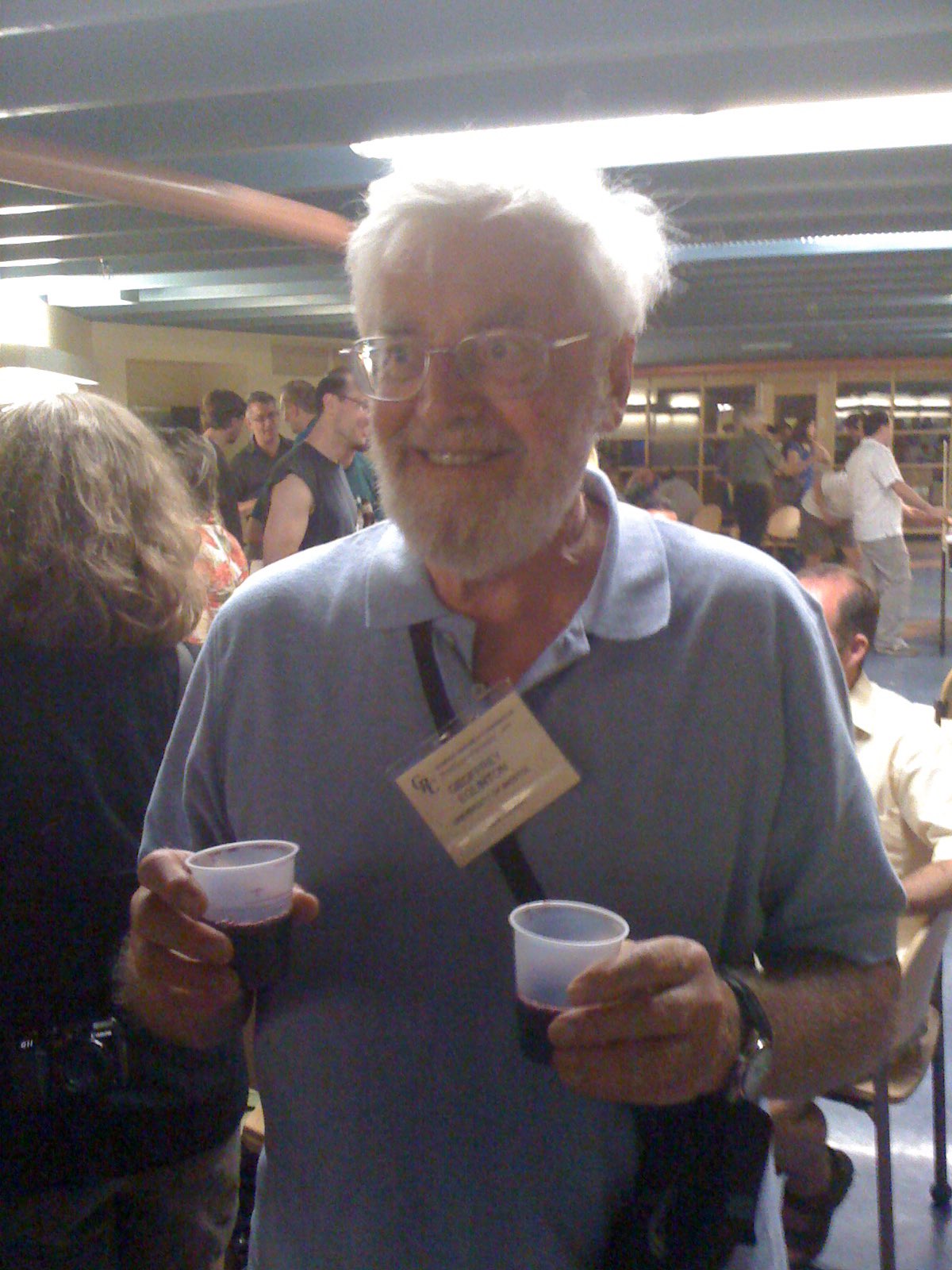 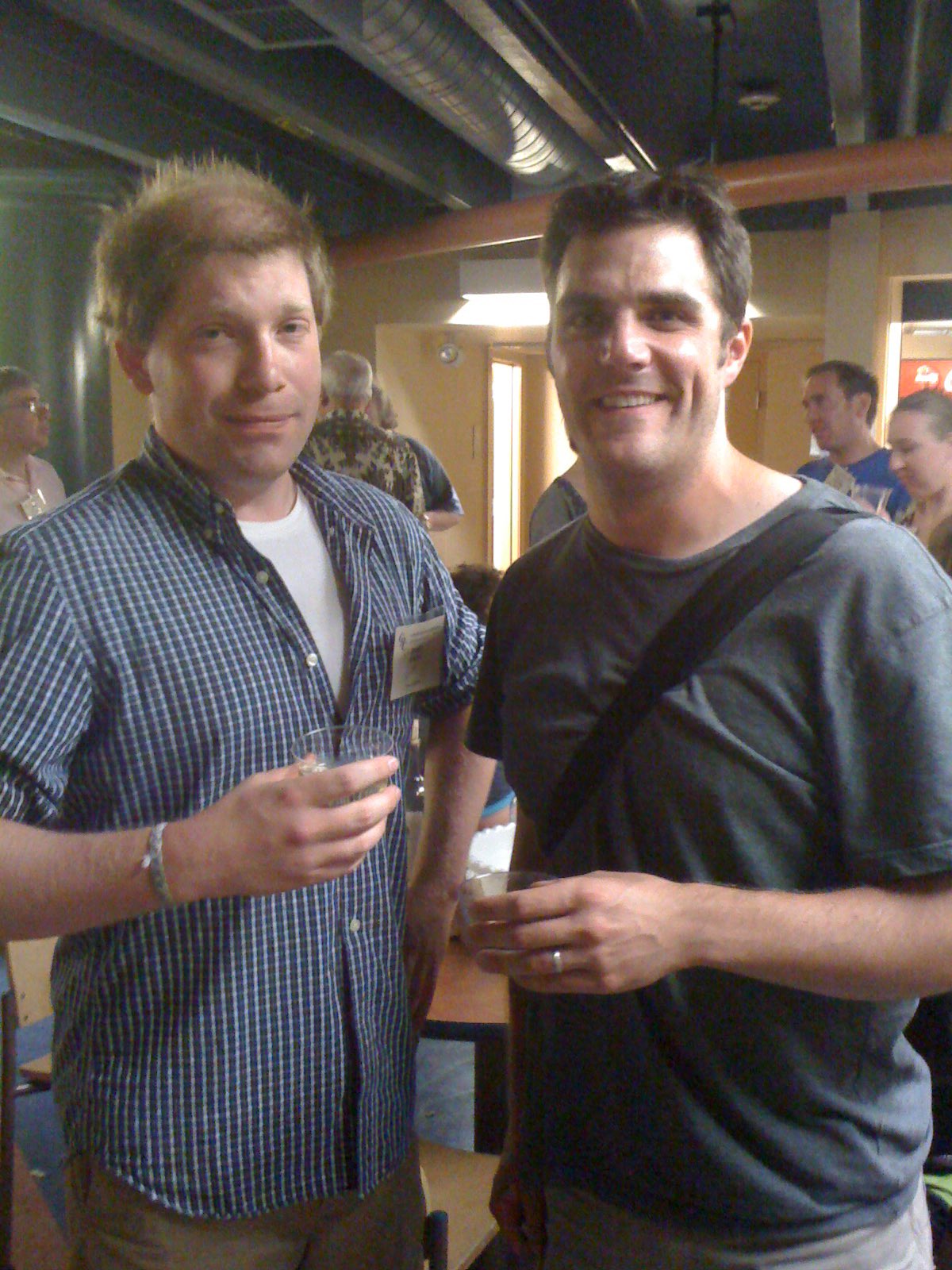 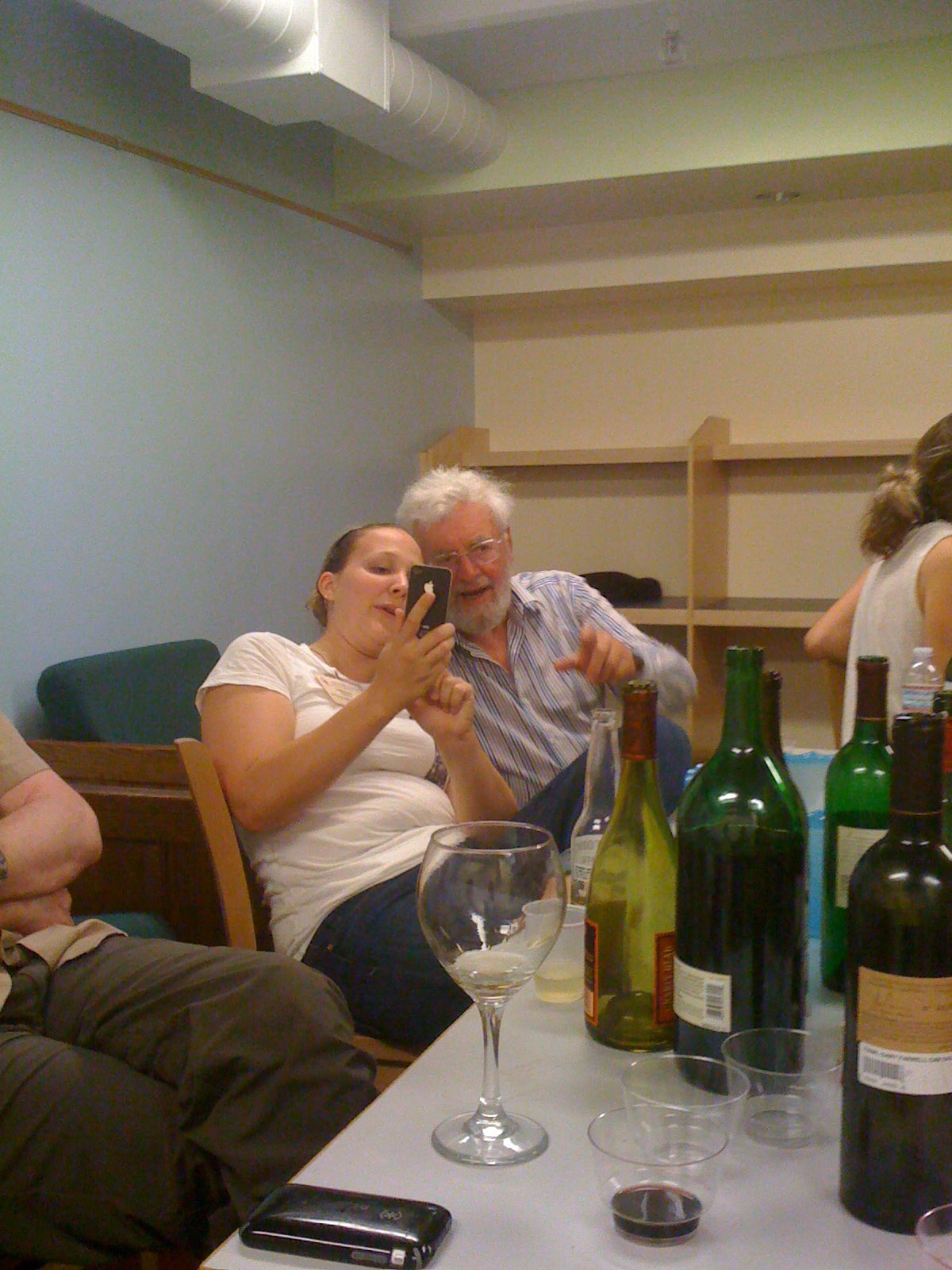 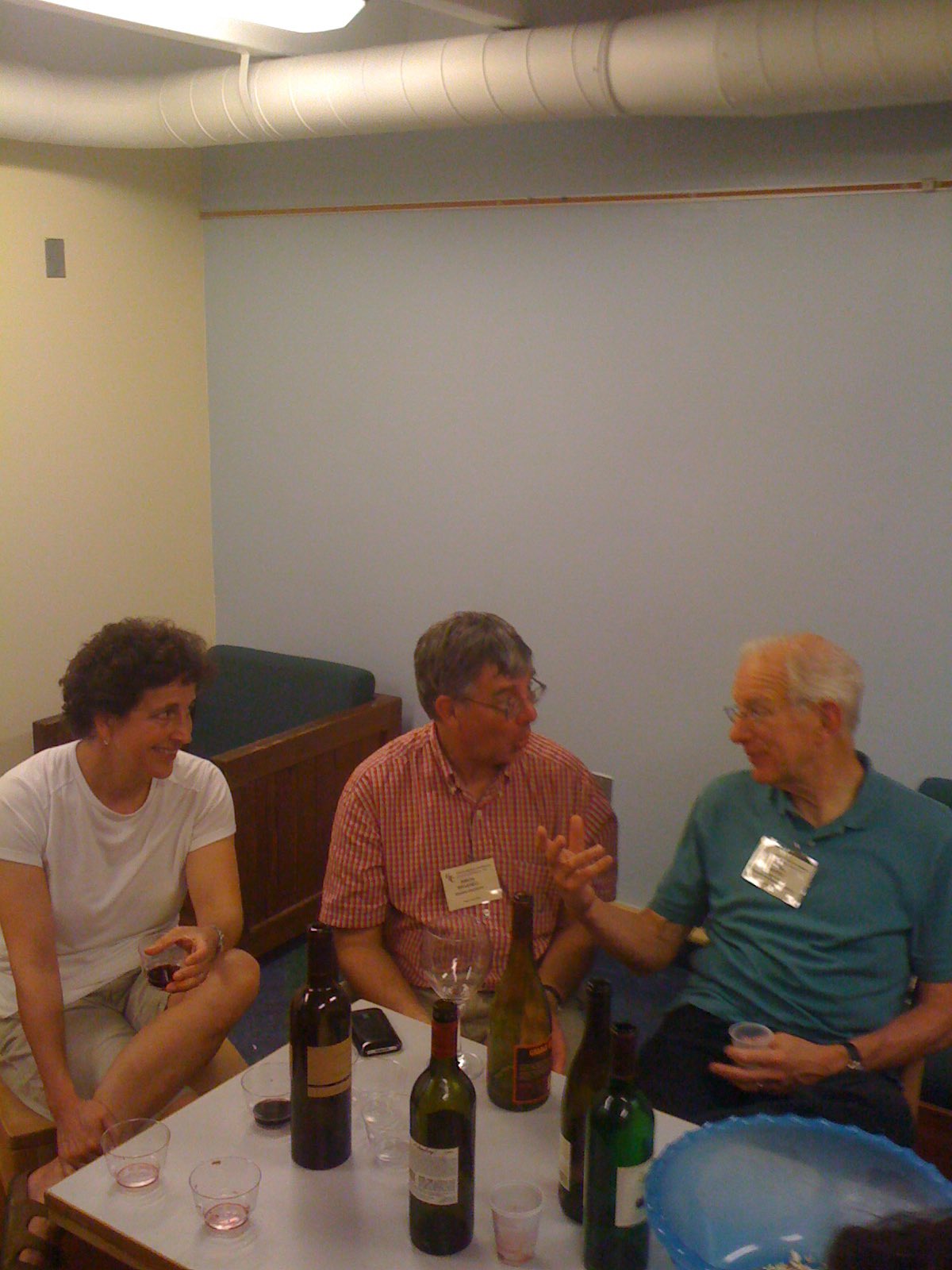 Also courtesy of Roger is a photo of the iconic Thursday night lobster dinner. 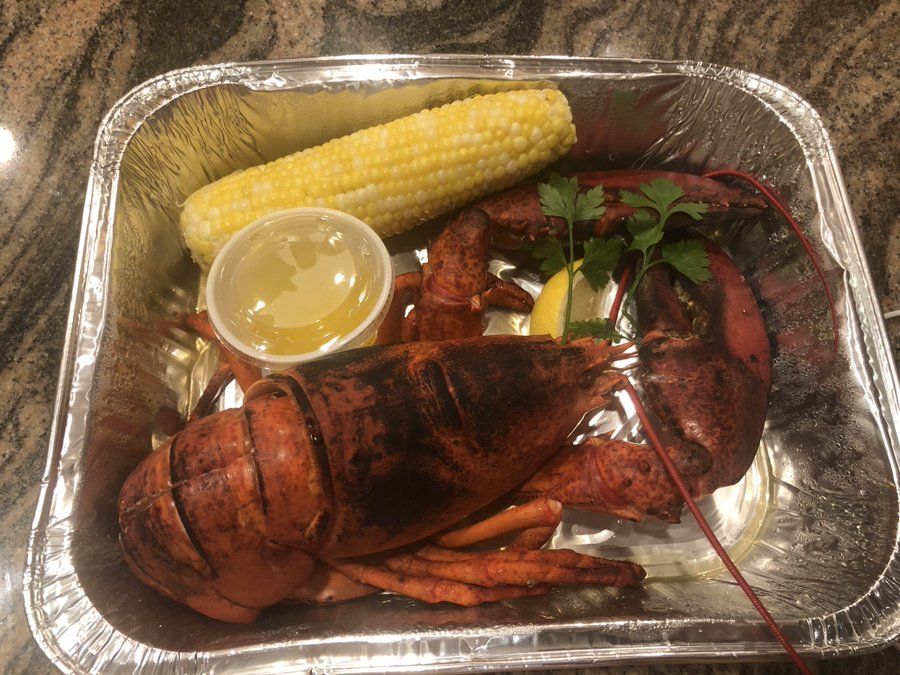 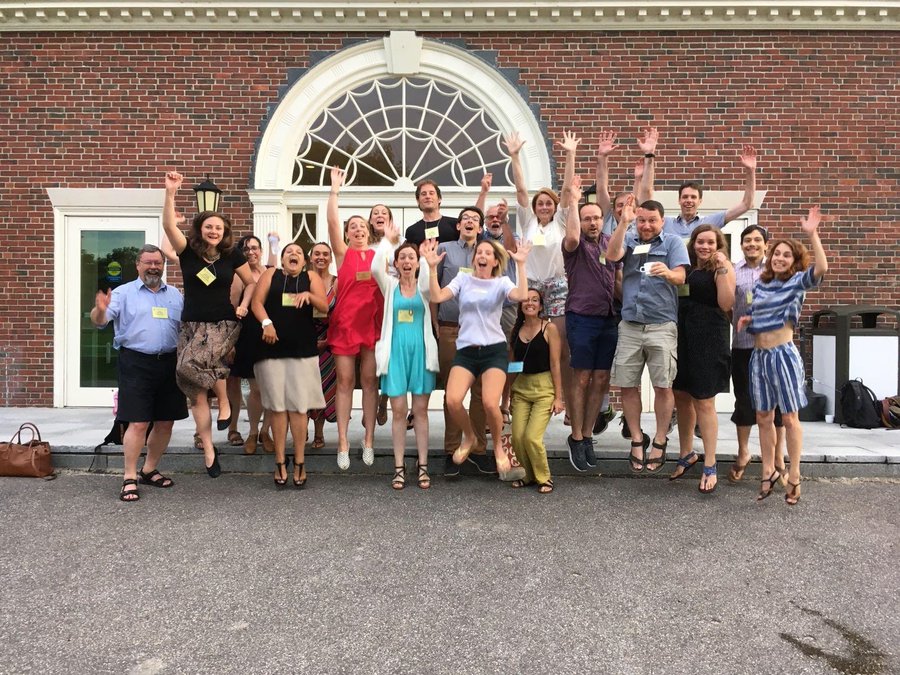 And others shared photos of meeting up (socially distanced) in other ways!

One of the key events at the GRC is the awarding of the Treibs Medal (by the Organic Geochemistry Division of the Geochemical Society). This year, the very worthy winner is my friend and colleague Kai-Uwe Hinrichs of MARUM. Congratulations, Kai. It is hard to imagine a more deserving winner.

Last year’s winner was Sylvie DeRenne (awarded at IMOG in 2019) and the previous GRC Awardee was Stefan Schouten.  Here is a history of Dutch diagenesis that… I guess led to his formation? 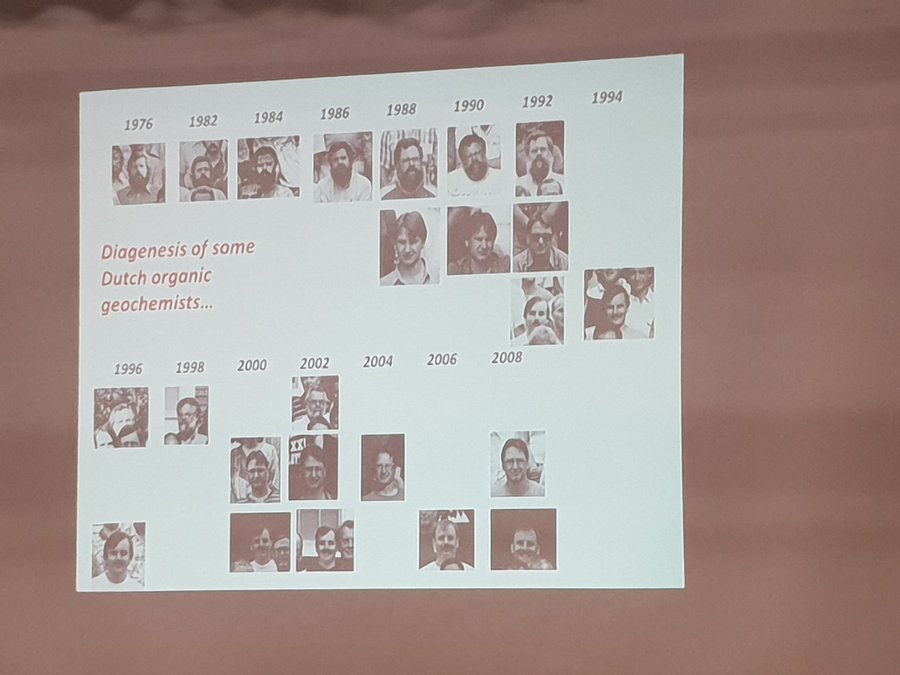 Previous recent winners include Kate Freeman, Marilyn Fogel and Pat Hatcher. But of course Steve Larter had to mark his award with a song… which he forced all of the 2014 Scientific Committee to sing.  I reluctantly share this: https://www.youtube.com/watch?v=rv-dLT2qAPE&feature=youtu.be

Also announced during our virtual GRC: Three members of the MIT Group started an organic geochemistry podcast!  Great initiative by @FatimagulHusain, @angelshale, and @wizardofdrozd You can check it out here!

And of course, Gordon Inglis also hosted the second Biomarker World Cup on Twitter – a chance to learn about biomarkers and banter!  The brackets and results are below… and if you follow some of the links, you will be able to learn about these amazing compounds.  And if you follow this link to the twitter thread, you can see the extensive associated banter (including reversals, betrayals, friendships torn asunder)!

From Gordon: To celebrate the 50th Anniversary of the first Organic Geochemistry Gordon Research Conference (GRC), the ‘Biomarker World Cup’ has returned for its 2nd edition! It will feature 16 biomarkers and conclude this weekend. Who will win? Only you can decide!! #50YrsOrgGeochemGRC

Group A, Team 3: Ladderanes. Made their debut at the GRC in 2002. Geoff Eglinton took Jan de Leeuw aside and asked if they were a joke (!). Biomarkers for anaerobic ammonium-oxidizing bacteria (e.g. ). Modern Art. (tinyurl.com/y6kj4nqe)

Vote now for the winner of Group A! Only one team will qualify to the semi-finals.

This was contentious with the upstart Ladderanes challenging the iconic n-alkanes. It prompted some discussion on Twitter: 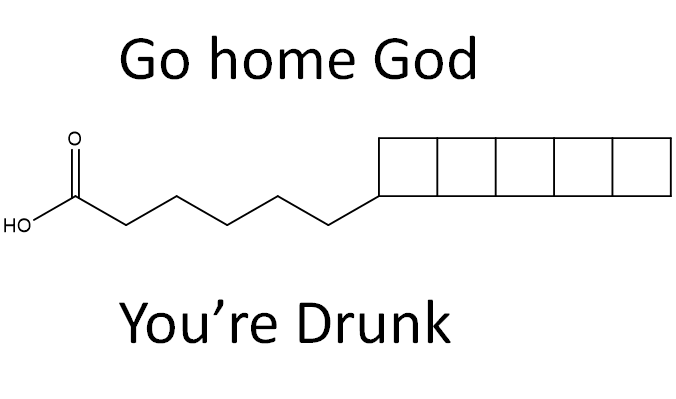 Wow! The holders (n-alkanes) are knocked out in the first round! Absolute scenes. Instead, the world’s weirdest biomarker (ladderanes) progress to the semi-final. Who will join them? Vote now!! #50YrsOrgGeochemGRC

Group B, Team 1: Crenarchaeol. A funky molecule with a unique structure. Specific to the phylum Thaumarchaeota. Not good enough for TEX86, but a rising star in the paleobarometry community (see @sarahjhurley et al; ). Fluid. (tinyurl.com/y2aqtnsq)

Group B, Team 4: 3-methylhopanoids. Once attributed to aerobic methanotrophs. Used to study Neoarchean aerobiosis, but can be produced by other bacteria. Methylation may aide survival under nutrient limited conditions (@PaulaWelander & Summons; ). Diverse. (tinyurl.com/y5e443rn)

Vote now! Only one team will progress!! #50YrsOrgGeochemGRC

A game of two halves. After leading for 12 hours, alkenones faded away in the second half. They will be really disappointed with that performance. Congratulations to crenarchaeol who progress to the semi finals. Next up: Group C!

Group C, Team 3: Porphyrins. Discovered and described by Alfred Treibs (“the father of organic geochemistry”) in 1936. Derived from chlorophylls and helped to confirm the biological origin of petroleum. Now used to provide insights into N-cycling (e.g. ). (tinyurl.com/y3ndaope)

Group C, Team 4: Highly branched isoprenoids. Notable for the distinctive “T-branch” in their carbon skeleton. Used to explore the rise of diatoms during the Phanerozoic (e.g. ). Also a useful sea ice proxy. Utility. (tinyurl.com/y35ugl4y) Vote now! Only one team will progress!! #50YrsOrgGeochemGRC

Porphyrins were a formidable force back in the 1980’s. However, they seem to have lost their enchantment as well as supremacy. The golden era is over. Instead, branched GDGTs progress! Now onto Group D

That was the closest race I have EVER seen. Nailbiting. Congratulations to phytane! Now onto the semi-finals

Semi Final 1: Ladderanes vs branched GDGTs. Do you prefer cyclobutane or cyclopentane rings? Only YOU can decide! #50YrsOrgGeochemGRC

Semi-final 2: Crenarchaeol vs phytane. Liquid chromatography vs gas chromatography. The winner will face brGDGTs in the final. You have 24 hours to decide!! #50YrsOrgGeochemGRC

Its been a long season for phytane and they looked increasingly fatigued as the game wore on. Crenarchaeol, with its superior mass-to-charge ratio, took full advantage. A big win for the big molecule. Now onto the long-awaited final

The final: branched GDGTs vs Crenarchaeol. Bacteria vs Archaea. Terrestrial vs Marine. It’s the ‘Battle of the GDGTs’. Who will win? You have 48 hours (!) to decide! #50YrsOrgGeochemGRC

It is all over! Crenarchaeol win the 2020 Biomarker World Cup. A deserved victory. Branched GDGTs are runners-up for the second World Cup in a row. Ouch!

Thanks to everyone who participated over the last week. It was a blast! #50YrsOrgGeochemGRC @rpancost

Congratulations to crenarchaeol but also to Laura Villanueva who clearly went all out for the cause, appealing to marine deities (and the entire Archaea research community) to support the cause. 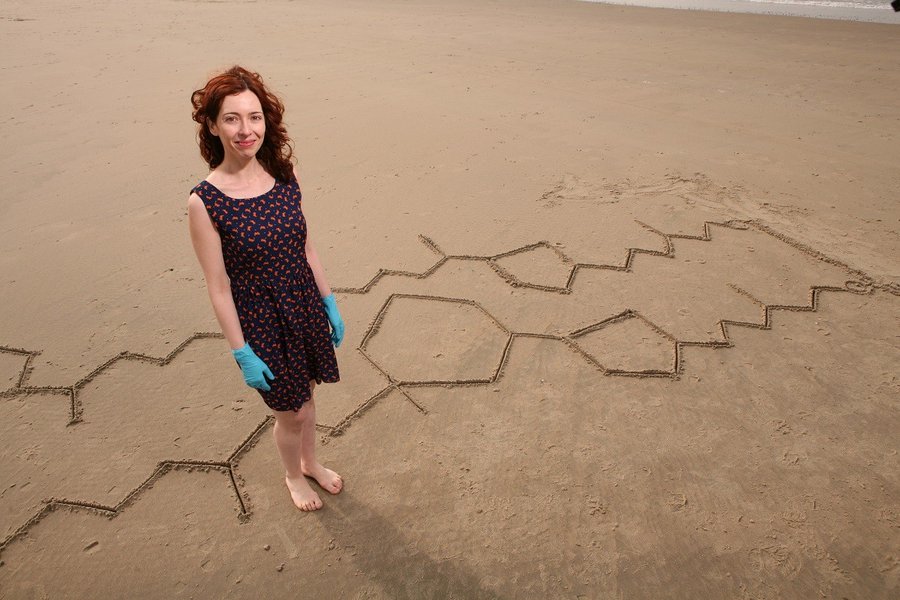 r.d.pancost
Rich grew up on a farm in Ohio and studied Geology at Case Western Reserve University and Penn State University, where he developed tools based on organic compounds to reconstruct past climate. He worked at the Netherlands Institute of Sea Research and joined the University of Bristol Organic Geochemistry Unit in 2000. He helped found the interdisciplinary Cabot Institute and became its Director in 2013. Throughout it all, he has most enjoyed bringing brilliant, diverse people together to stimulate the creation of new ideas.